Nick Garza is a 13th-generation Texan making what he calls "Tex-eclectic" country.

For booking and all other inquiries:  nickgarzasgetalong@gmail.com 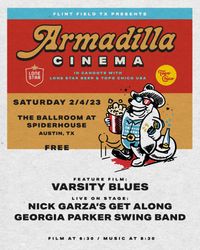 Nick Garza's Get Along

"Garza could play Townes Van Zandt in a biopic just by looks alone, but he also clearly revels in same sly wordplay."

Austin Chronicle "Out Of Her Mind" Song Premiere

"That song is a monster hit! A future classic!"   - Texas Music Office on 'Muchacha'

KUTX Song Of The Day  "Another Bloody Morning"

KUTX Song Of The Day "Denial"

KUTX Song Of The Day "Muchacha"